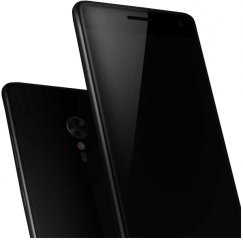 This sequel model to Lenovo's ZUK Z1 is a 5.5-inch Full HD Gorilla-Glass-protected Android phone whose 8-megapixel secondary camera can apparently rotate to face the opposite side of the phone. This rather weird (in a good way) facet is accompanied by a bevy of upscale specs, including a Snapdragon 820 CPU (dual-core 2.15GHz + dual-core 1.6GHz), a 3GB LPDDR3 RAM, and a 360-degree Touch ID fingerprint reader. Topping off the ZUK Z2 are a 13-megapixel OIS primary camera, a 4100mAh battery power, and a 128GB/64GB non-expandable memory.