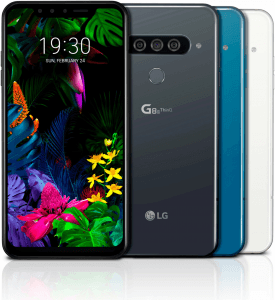 This octa-core smartphone delivers Air Motion, a technology powered by its frontal ToF (time-of-flight) camera allowing users to command the phone without touching the display, while it offers a threefold biometric security system, which includes fingerprint detection, Face Unlock, and palm vein recognition. It also runs on the Snapdragon 855 2.84GHz octa-core engine, which was among the fastest mobile processors on the market as of its MWC 2019 unveiling.

General LG G8s ThinQ Information
Pros and Cons Review The G8s ThinQ replaces its mother model's 1440p display with a 6.2-inch 1080p-only screen, but it brings back the 2.84GHz eight-core engine and touch-less commands through Air Motion. Explore its other cons and pros in our specs-based analysis here. (more) LG phones 2020/2019 View all the new LG phones.