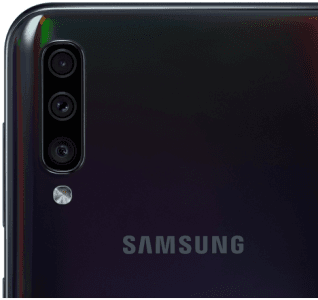 This phone (AKA Samsung A50) belongs to the first few mid-range smartphones to feature an on-screen fingerprint sensor, which, when it was released, was more common among flagship-class models, while it boasts a three-camera system headed by a promising 25-megapixel main lens, which is a huge pro, coming from a 2019 Q1 middle-class contender. Finally, it joins the rather small (as of this write-up) group of smartphones armed with flagship-class 25-megapixel selfie cams.

Also known as: Samsung A50.

General Samsung Galaxy A50 Information
Pros and Cons Review The Galaxy A50 banks on a triple rear camera and a competitive 25-megapixel selfie cam that sadly lacks an autofocus capability and a frontal LED flash. Check out this specs-based analysis to learn more about its pros and cons. (more) More Samsung phones See all the most recent Samsung phones.