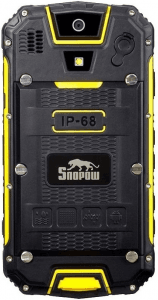 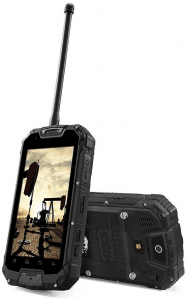 The M9-LTE from Snopow is a disturbingly-heavy (353 grams) rugged phone that encloses its specs in an IP68-certifed waterproof, dust-tight, and drop-resistant casing. Despite sporting only a 4.5-inch qHD screen, it boasts a 4700mAh reverse-charging battery and sports a 13-megapixel main camera. It also features 16GB of native memory, a quad-core engine with 2GB of RAM, an NFC chip, and Push-to-Talk. Topping it off are 4G LTE connectivity and a 2-megapixel CMOS secondary camera.