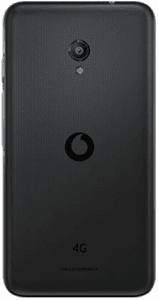 Despite touting Vodafone's Turbo appellation, the Smart Turbo 7 is a potentially-sluggish 2016 smartphone, with a 5-inch FWVGA (854 x 480) screen, 4G LTE connectivity, and an 8GB memory expandable by up to 32GB among its key specs. It scores a nicely-low 0.332 EU head SAR value, but suffers from a staggeringly-high (knowing that the limit is 2W/kg) 1.67 body-worn rating. Its remaining technical features include a 1GHz quad-core CPU paired up with no more than 1GB of RAM, a 2000mAh battery, and a pair of 5- and 2-megapixel fixed-focus cameras.