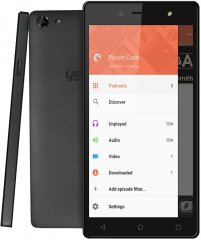 Greeting users with a so-so 4.7-inch HD 312ppi screen, the Andy 4.7M LTE's budget-class specs include a Mali-T720 graphics engine bundled with a basic 1.3GHz quad-core processor and a 1GB RAM. Also on board are 4G LTE connectivity, an 8-megapixel HD-video primary camera, and an 8GB memory with support for up to 64GB of microSD expansion. It touts a decent 5-megapixel selfie cam, but sadly settles for a sub-average 1800mAh battery power -- the average as roughly 2200mAh as of its release.