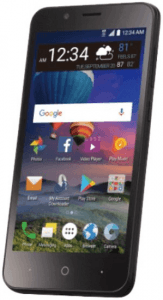 The ZTE ZFive C LTE sports a 5-inch FWVGA (854 x 480) screen that's somewhat typical among models in the lowest Android tier, while it allows up to 256GB of top-up memory, which is a rather generous facet, coming from a mere entry-level smartphone.

To wrap it up, it supports 4G-LTE network bands, which is a big plus, coming from a basic Android phone.