Judging from its overall mix of pros and cons, the Alcatel 1X Evolve, which is obviously based on the 1X, is, quite frankly, a poorly-evolved 2018 budget-class smartphone. Leading its drawbacks is a 5.34-inch display that sits on a mediocre FWVGA+ resolution of only 960 x 480

. That said, the fact that it comes with a wide 18:9 aspect ratio

, which it lifts straight out of the playbooks of some of the best large-screen smartphones as of this specs-based Phonerated review, might turn out to be a big difference-maker for this model, at least insofar as the entry-level smartphone category is concerned. 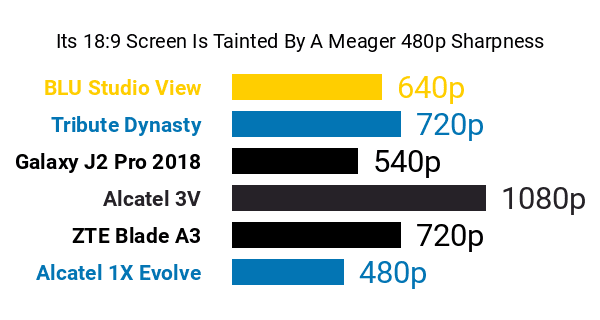 Don't Buy The Alcatel 1X Evolve Before You Check:

As can be expected of a budget-tier smartphone, the 1X Evolve's cons include an unambitious 1.1GHz quad-core MediaTekTM MT6739WM processor

coupled with no more than 2GB of RAM. Its 2460mAh battery pack

sounds lackluster as well, but it does promise some decent stress test scores, including a 21-hour talk time

that was roughly 50 percent higher than the average value when it entered the entry-level market. We cannot help but wish that it ran on an Android Go Edition platform

, though, instead of settling for the stock edition of Android 8.1 Oreo. Feel free to check out some Android Go smartphones here.

When it comes to storage, the 1X Evolve offers a tolerable 16GB internal memory that is accompanied by a measly 32GB-only external memory card slot

As for imaging, this model features a run-of-the-mill 8-megapixel rear camera

with a standard LED flash and an FHD-1080p maximum video-recording resolution, whereas the original 1X touts a 13-megapixel main cam. Its 5-megapixel selfie cam is far from a pro as well, but at least it is aided by an LCD screen flash function

-- obviously to brighten up selfies taken under poor lighting conditions.

and a Suede Blue finish, which, along with its aforementioned features, tell us that the 1X Evolve was specifically made for budget-cautious shoppers who want nothing but an essentials-only Android phone.