A 2019 edition of Alcatel's Go Flip feature phone that also goes by the name of SmartFlip under AT&T, the Alcatel Go Flip 3 seems to cater to aging users more than any other clientele, at least when it comes to its technical pros and cons.

, which was somewhat the golden standard for flip phones around the time we were reviewing its specs. It also comes with a square 1.44-inch external screen

, which we consider a pro, knowing that a few older clamshell phones do not offer such facet -- external screens, of course, are primarily for checking the battery life and notifications without having to flip the phone open. 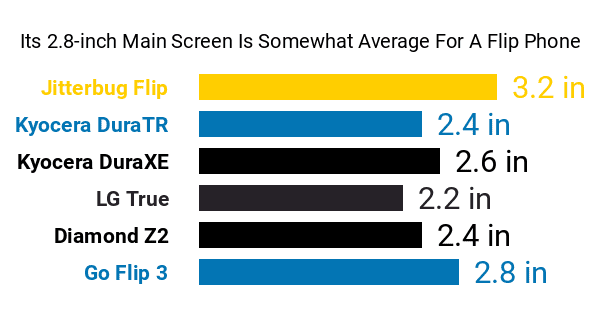 Don't Buy The Alcatel Go Flip 3 Before You Check:

Going back to its cons, the Go Flip 3 runs on a basic 1.1GHz quad-core Qualcomm Snapdragon 210 processor

coupled with a rudimentary 512MB-only RAM

-- a good number of tantamount models have at least 1GB of RAM under the hood. Also, this model is the opposite of a photography-driven phone, seeing that it touts a mere 2-megapixel fixed-focus camera that does not even have an accompanying LED flash

When it comes to stamina, its 1350mAh-only battery pack

is obviously nothing worth calling home about, especially when compared to the 2000mAh cells lugged by a few competing flip phones featured here on Phonerated. It scores a 7.9-hour 4G talk time and a 17.8-day 4G standby time, neither of which are particularly impressive, insofar as the 2019 market is concerned.

On storage duties is an old-fashioned 4GB memory that's at least accompanied by a memory card slot for up to 32GB of extra space. This flip phone's senior-friendly features include VoWiFi, VoLTE, and HD voice

, all of which are tailored to enhancing the overall in-call audio volume and quality. It has a matte finish and it runs on Alcatel's proprietary KaiOS 2.5. Moreover, it comes pre-integrated with Google Assistant

(for user guidance) and Google Lens.

So, with those pros and cons in mind, the Go Flip 3 obviously fits the bill for seniors and pragmatists who want a simple call-and-text flip phone.

Full Specs
Best Flip Phones 2020 Is it your best choice?

** This phone is also known as: Alcatel SmartFlip