Blackview A60 Pro Review of Pros And Cons


As most Pro versions go, the Blackview A60 Pro is an overall upgrade over its A60 little brother when it comes to technical pros and cons, although some of its specs still nail it to the budget-class smartphone category. For one, it settles for a quad-core 2GHz Helio A22 processor

, which obviously flounders in comparison to the engines powering many eight-core models. It comes with 3GB of RAM

this time, though, which we consider a huge leap from the plain A60's paltry 1GB capacity.

Don't Buy The Blackview A60 Pro Before You Check:

-- NFC was already considered a staple smartphone facet around the time of this Phonerated review. Moreover, it does not promise much when it comes to selfies, touting a middle-of-the-road 5-megapixel selfie cam

on its screen's waterdrop notch.

Speaking of its screen, the A60 Pro features one of the widest displays

within its price group (It was pegged at roughly 90 dollars as of this write-up), in the form of a 6.1-inch IPS display with a 19.2:9 aspect ratio, bringing to mind some full-blown high-end phablets. Regrettably, it settles for a modest 1280 x 600 HD+ sharpness and scores a mere 232ppi definition

, although it does come with a scratch-resistant AGC Dragontrail Glass finish

Its pros also include a dual rear camera

consisting of an 8-megapixel main lens and a depth-of-field sensor that enables DSLR-like bokeh effects for portrait shots -- check out some of the best photography phones here. Additionally, it boasts a sizable 4080mAh battery

and it combines a rear-mounted fingerprint detector with Blackview's Face Access feature for security. Its native storage memory caps off at only 16GB, but it can be expanded by up to 256GB. 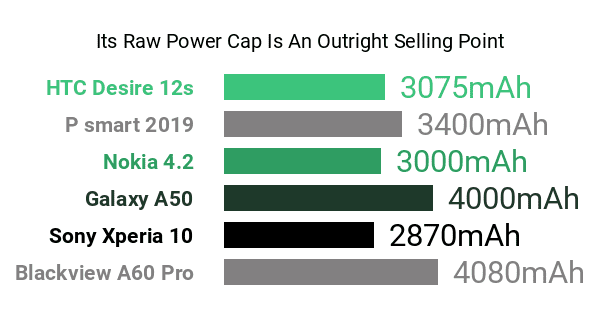 With two nano SIM card trays and a coating of either Emerald Green, Gradient Blue, or Interstellar Black rounding out its pros and cons, the A60 Pro winds up as a viable choice for those eying a large-screen, high-stamina budget smartphone.