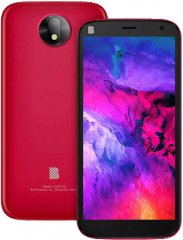 
Almost an entirely humdrum entry-level smartphone, if not for a couple of pros here and there, the BLU C5 Plus suffers from an archaic hardware setup that consists of a quad-core 1.3GHz processor

and nothing but 1GB of RAM

is one of the market's least-appealing as well. Adding some insult to injury is the blatant absence of 4G LTE connectivity

among its specs, pretty much making it sound sluggish compared to most of the newest 4G-enabled phones when it comes to web browsing.

Don't Buy The BLU C5 Plus Before You Check:

Depending on whether you look at its official page or its sales guide, the C5 Plus comes with either 2000mAh or 2200mAh of raw battery power

. Either way, its battery pack likely gets bullied by those lugged by the best high-stamina smartphones listed here on Phonerated.

Those underwhelming facets aside, this low-end BLU Android comes with the Go Edition of Android 8.1 Oreo

, which is specifically tailored to phones with its kind of pros and cons. Its Android Go ecosystem features things like a dedicated data manager for conserving data allocation when browsing as well as lighter versions of essential Google applications and lighter software updates.

Also trying to offset its cons is a 16GB internal memory

, which is twice what many competing low-enders available as of this technical review offer. It supports up to 64GB of extra space.

Heading over to its cameras, the C5 Plus is home to a so-so 8-megapixel LED-flash-equipped primary cam, while another 8-megapixel cam sits right above its display. It is enabled for HD (1280 x 720) video-recording at 30fps.

Also part of its pros and cons is a 5.5-inch HD+ (1440 x 720) screen whose 18:9 aspect ratio tries to mimic those of some higher-class large-screen phones. Its color options include Red, Black, and Gradient Blue, the latter being somewhat of a standout, at least within the lowest Android category.