BLU's 2018 Vivo Go is an entry-level smartphone that owes its name to its Android 9.0 Pie Go Edition operating system

. Android Go, of course, is a redesigned version of stock Android ecosystems that's designed to demand less processing power and use up less mobile data/storage, among other things, making it a reasonable choice for first-time smartphone users and non-techies -- check out some competing prepaid smartphones from Tracfone here.

Like most other Android Go smartphones, however, the Vivo Go suffers from a low-caliber hardware setup, which includes a modest 1.5GHz MediaTek 6739 quad-core processor

coupled with a basic-level IMG Power VR GE8100 graphics chip. Rubbing some salt to its wounds is the fact that it comes with no more than 1GB of RAM

, whereas a lot of models with tantamount pros and cons at least offer 2GB on that front. 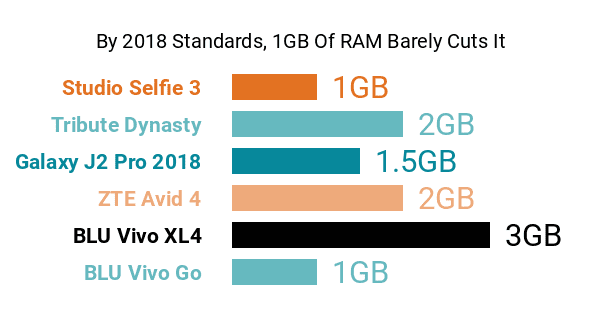 Don't Buy The BLU Vivo Go Before You Check:

As of this specs-driven Phonerated review, the Vivo Go's 18:9 screen aspect ratio

was a surefire pro, at least in the entry-level Android category. Having said that, it won't be joining our list of the best BLU phones when it comes to display, settling for cons like a mundane 1440 x 720 HD+ resolution

and, consequently, a meager pixel density score of only 268ppi 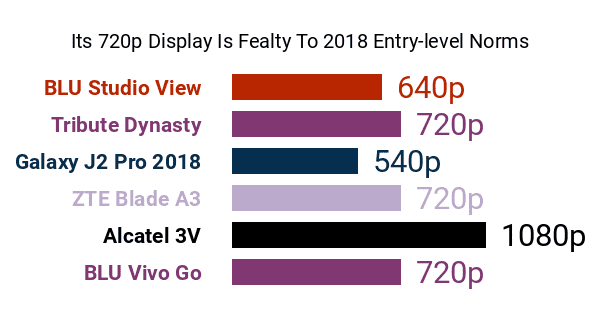 As for its pros, this 2018 BLU model banks on a dual-lens rear camera

composed of 8- and 0.3-megapixel cameras. Sure, its lenses are not as high-resolution (with emphasis on its VGA lens) as the ones sported by some of the best photography smartphones when it was announced, but they nevertheless enable hardware-level depth-of-field adjustment

-- a potential difference-maker against most other low-budget contenders. Up front, it touts a 5-megapixel selfie camera spiced up by a dedicated front-firing flash

Also among the BLU Vivo Go's pros and cons is a 2600mAh battery that, although does not promise much in terms of raw capacity, sounds rather respectable, being aided by a dedicated power-saving button

-- stamina is a typical weak point among entry-level smartphones. Its 16GB native memory, which can be expanded by up to 64GB, sounds tolerable as well.

All said, the Vivo Go won't be going far with the feature set that it brings to the table, but it does sound like a decent purchase for Android newbies and those with practicality in mind.