, which brings to mind the screens of some of the best phablets around the time of its unveiling. Apart from its size, however, there's not much to be excited about insofar as its screen is concerned, since it settles for a lowly (by 2018 phablet standards) 1520 x 720 HD+ resolution

and, as a consequence, scores a paltry 271ppi pixel density

Don't Buy The BLU Vivo XL4 Before You Check:

(It runs on a MediaTek Helio P22 octa-core engine) sounds like a slight con as well, considering that, as we were reviewing its technical specs, the best octa-core smartphones available usually clock in at around 2.5GHz. Having said that, the fact that its processor is aided by what BLU calls AI Accelerated Technology

, which essentially enables things like AI-powered photography and its AR emoji feature, makes its not-too-competitive raw speed a tad forgivable. Accompanying its processor is a so-so 3GB RAM.

Looking into the rest of its pros and cons, the Vivo XL4 is loaded with 32GB of on-board storage that can be expanded by up to 128GB

, which we flagged as a slight perk, knowing that some of its BLU cousins listed here on Phonerated support only 64GB external memory cards. This 6.2-incher also comes with a 4000mAh Super Battery

that obviously gives it an advantage versus many competing mid-rangers when it comes to life span. 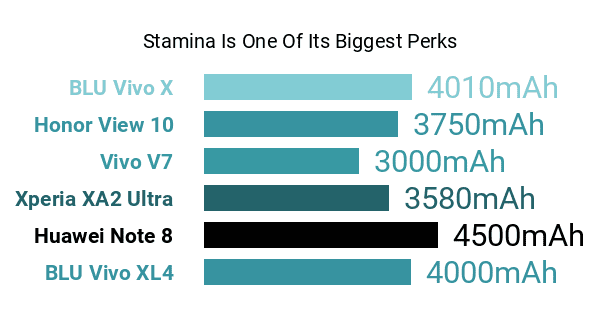 Jumping over to its cameras, XL4 touts a respectable 13- plus 2-megapixel dual-lens system at the back

, while a 13-megapixel front-facing camera, which comes with its own front-firing LED flash

, is perched right above its large display. Its multimedia pros and cons also include the DTS audio technology

that promises to deliver theater-like audio. 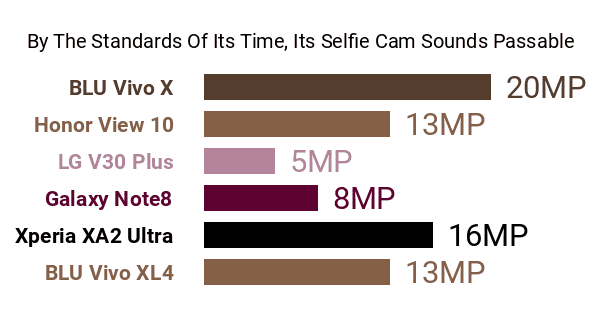 Also joining in are dual SIM card slots and 4G LTE Cat 7 connectivity of up to 300Mbps, which round out this Vivo model as a reasonable purchase for those eying a wide-screen middle-class Android that won't break the bank.