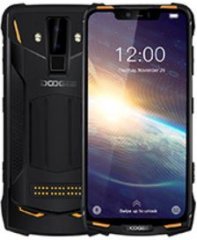 
The DOOGEE S90 Pro is a sibling to the S90 that comes with pretty much the same pros and cons as the original model, except it replaces the Helio P60 engine with a Helio P70 chip, which runs on two quad-core clusters clocked at 2.1GHz and 2GHz correspondingly (Check out the best octa-core phones here). It also still comes with 6GB of RAM

, which is respectable, relative to the rest of its mid-level specs.

Don't Buy The DOOGEE S90 Pro Before You Check:

Among its cons is an 8-megapixel front-facing camera

that won't likely be joining our list of the best phones for selfies any time soon, seeing that many models on that list safely pass the 13-megapixel threshold. It also weighs a hulking 300 grams

, although this drawback is not exactly surprising, coming from an endurance-driven rugged smartphone. Speaking of rugged, its shell passes IP68, IP69K, and MIL-STD-810G rugged certifications

, making it splash-proof, dust-tight, and shock-resistant, among other things.

Apart from its exterior, the S90 Pro's pros also include a robust 5080mAh battery

that's enabled for both wired and wireless (10W) charging, bringing to mind a few other big-battery contenders. It scores a little over 28 days of standby time

, which was roughly 90 percent higher than the average value around the time of this data-driven Phonerated review.

-- most of its rivals stick to single-tone and dual LED flash setups. Another notable facet is the S90 Pro's programmable shortcut key

, which can be set to quick-launch its native SOS function, underwater camera mode, or gaming mode.

Adding to its pros and cons are a 6.18-inch Gorilla-Glass-4-finished FHD+ (2246 x 1080) display, a 360-degree fingerprint reader, and a facial recognition system carried by its aforementioned selfie camera. It is offered in Fire Orange and Mineral Black.

In the end, the S90 Pro befits users who are in search of a high-stamina 6-incher that they can take on their outdoor trips.