Nokia 1 Plus Review of Pros And Cons


One of the lowest-specked models to come out during the MWC 2019, the Nokia 1 Plus suffers from hardware cons like a paltry 1GB-only RAM count

and a an old-fashioned 1.5GHz quad-core MT6739WW processor

. Fortunately, this entry-level Nokia model is also one of the first to run on the Go Edition of Android 9.0 Pie

(Check out other Android Go phones here), which consists of stripped-down versions of essential Google applications, consequently promising to eat up to 50 percent less storage than the stock OS.

Don't Buy The Nokia 1 Plus Before You Check:

, which serves as an interactive mobile companion for its non-techie target clientele.

that at least comes with an elongated 18:9 aspect ratio

, which it probably lifted out of the playbooks of some high-end large-screen smartphones. It is powered by a 2500mAh battery that makes up for its unpromising raw power capacity

with some above-average stress test scores, including a 25.7-day standby time

and an 83.3-hour music playback time

is far from a pro, considering that many of its entry-level competitors start out with 16GB of on-board memory. It does come with a microSD card slot for memory expansion, though.

As of this specs-based Phonerated review, this low-ender's 8-megapixel camera was all but standard among models within its price group. Additionally, its humdrum 5-megapixel selfie cam

is easily bullied by those rocked by the best selfie smartphones around. When it comes to connectivity, though, the 1 Plus likely holds its own versus a lot of other entry-level competitors, offering an LTE Cat 4 adapter that reels in up-to-150Mbps data rates alongside the VoLTE call audio technology. 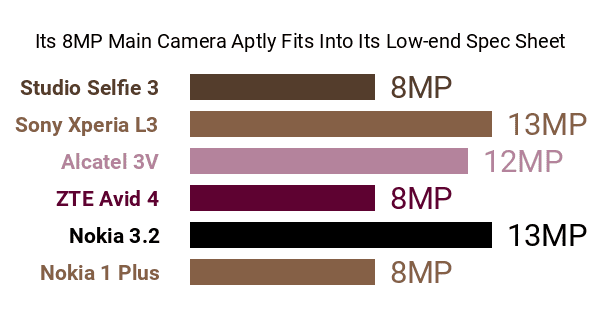 Rounding out the 1 Plus's pros and cons is a polycarbonate shell treated with a 3D nano-pattern technology, which, all things considered, sounds just about right for a phone that caters to first-time smartphone users and those who do not fancy an expensive flagship phone.