Nokia 3.1 A Review of Pros And Cons


The Nokia 3.1 A is a watered-down version (specs-wise) of the original 3.1 model whose mishmash of pros and cons makes it a fitting choice for Android newbies and practically-minded shoppers. Starting off with its drawbacks, this 2019 Nokia release opts out of the octa-core smartphone category, instead running on a modest 2GHz quad-core Snapdragon 429 processor

that's accompanied by only 2GB of RAM

-- a few similarly-specked models pack at least 3GB on that front.

sounds a bit problematic as well, at least compared to the 64GB native storage caps offered by a few of its sub-100-dollar rivals (It was pegged at $89 as of this data-driven review). That being said, it does support up to 128GB's worth of external memory.

Still on its cons, the 3.1 A settles for an unassuming 8-megapixel rear-facing primary camera

, whereas its base model touts a 13-megapixel shooter. Similarly, it replaces the 3.1's 8-megapixel selfie cam with a 5-megapixel-only cam

As for its pros, this AT&T-carried model banks on a 2990mAh battery

, which is an AI-powered stamina feature that learns your usage patterns as a method of minimizing overall battery consumption. 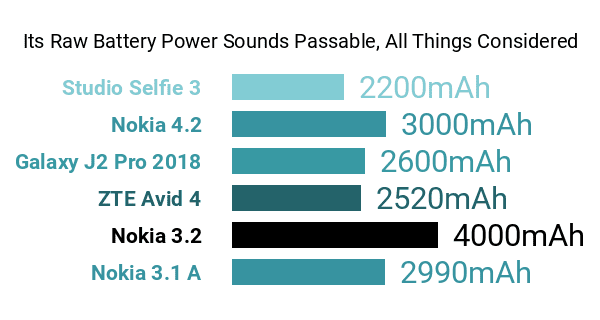 Like a good number of other budget smartphones of its generation, the 3.1 A features a wide 18:9 aspect ratio

on its 5.45-inch display, bringing to mind some higher-specked large-screen smartphones. Its aforementioned screen solution makes its facade more elongated than older 16:9 setups, mainly for enhancing the user's viewing experience and providing a better grip.

With a Black polycarbonate body and the Android 9.0 Pie operating system rounding out its pros and cons, the Nokia 3.1 A makes for a decent introductory smartphone for battery-cautious users.