Other than being carried by Cricket and rocking a White polycarbonate housing, the Nokia 3.1 C pretty much has the same pros and cons as the 3.1 A, consequently expanding the brand's introductory-class Android family.

that obviously flounders in comparison to the basic eight-core engines powering some of its contemporaries in the budget smartphone category. It also comes with no more than 2GB of RAM

, whereas some other models within its price group featured here on Phonerated offer at least 3GB or even 4GB of RAM.

that can at least be expanded by a maximum of 128GB, although a few of its Nokia cousins allow up to 400GB of external storage. 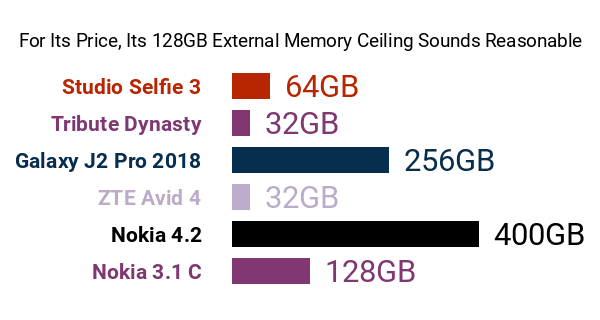 Imaging-wise, the 3.1 C does not offer any flashy pros. In fact, it touts a mundane 8-megapixel f/2.0-aperture primary camera

and an even more underwhelming 5-megapixel-only front-facing cam

Its appreciable facets include a 2990mAh battery

whose raw power capacity sounds rather hefty, at least coming from an entry-level smartphone that came out around the time of this technical review. Just like its 3.1 A sibling, it features Adaptive Battery

, which essentially learns the user's usage patterns in order to maximize its overall battery life span.

, which makes its screen wider than those with conventional (as of its market entry) 16:9 setups. It offers Bluetooth v5.0, LTE Cat 4 network connectivity, and a single nano SIM card slot.

Topped off by the Android 9.0 Pie ecosystem, Nokia's 3.1 C caters to budget-cautious shoppers eying a low-end phone that puts a bit more effort into stamina than several others within this category.