At its core, the Samsung Galaxy A2 Core is a low-caliber smartphone intended for basic Android users and those who just want essential smartphone pros and cons. Its biggest drawbacks include a subpar (by the entry-level standards as we were reviewing its specs) 5-inch 960 x 540 qHD display

that obviously shies in comparison to the HD-720p or FHD-1080p facades sported by a few of its rivals in the Android Go department.

Don't Buy The Samsung Galaxy A2 Core Before You Check:

Speaking of Android Go, the A2 Core is powered by the Go Edition of Android 8.0 Oreo

, which essentially means that it is loaded with stripped-down versions of basic Google applications and is infused with a bunch of performance tweaks to help out its unpromising hardware.

, which, although won't be putting it on Phonerated's list of the best octa-core phones any time soon, still sounds tolerable, coming from a 2019-released entry-level smartphone. Its measly 1GB-only RAM count

sounds paltry, though, even by the low-end standards of its time. 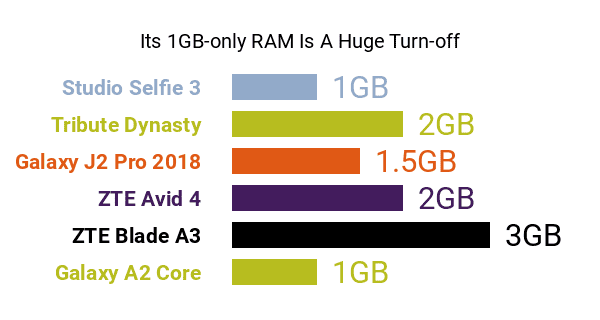 The Galaxy A2 Core's cons also include a couple of old-fashioned cameras. At the back, it touts a 5-megapixel f/1.9-aperture main camera

that is at least accompanied by a standard LED flash, while up front sits a mundane 5-megapixel selfie cam

This Galaxy A model is far from a big-battery smartphone, relying on a so-so 2600mAh battery scoring a 12-hour continuous video playback time (1.5x videos). It also does not bother with a fingerprint scanner

, which had grown to be a standard smartphone pro as of its market entry.

, which, by the standards of this Android class, sounds rather generous. It dons either a Blue or a Black finish.

So, keeping its low-class assortment of pros and cons in mind, the Galaxy A2 Core caters to those in search of an eight-core-powered essentials-only smartphone.

** This phone is also known as: Samsung A2 Core