Otherwise known as the ZFive G LTE for GSM networks, the ZTE ZFive C LTE (CDMA) is an entry-level smartphone whose pros and cons are tailored to basic users and those in search of a cheap introductory Android (It was pegged at 50 dollars as we were writing this). Among its downsides is its dinosaur-esque 5-inch 854 x 480 (FWVGA) display

, which obviously shudders in comparison to the HD (720p) screens offered by a few other Tracfone-carried prepaid smartphones listed here on Phonerated. 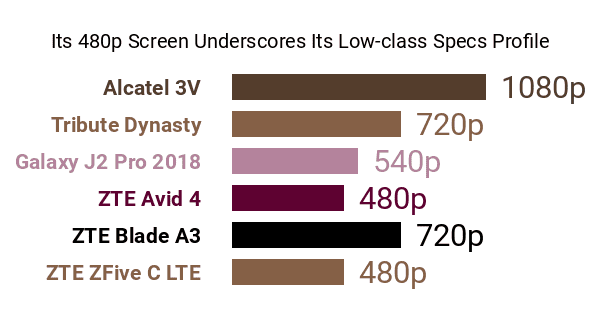 Don't Buy The ZTE ZFive C LTE Before You Check:

This prepaid ZTE model also does not look to impress anyone hardware-wise, running on a low-class Qualcomm quad-core processor (MSM8909) clocked at 1.1GHz

, whereas some competing entry-level smartphones load their specs on the back of basic octa-core engines (Check out some popular eight-core-powered models here). That being said, its 2GB RAM count

sounds somewhat appreciable, knowing that a lot of similarly-specked smartphones settle for pitiful 1GB RAMs only. 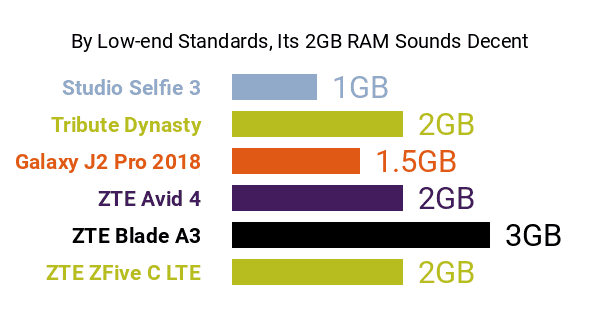 , were both below the corresponding averages at the time of this technical review. That said, we like its 16GB memory expandable by up to 256GB

, seeing that a lot of its low-end rivals suffer from 8GB storage caps and support only up to 32GB of external space.

that's at least equipped with a standard LED flash and autofocus, with a 2-megapixel-only secondary cam

sitting up front for selfies. It comes with a 4G-LTE network adapter

, just like the ones in this gallery of the newest 4G-ready phones, consequently landing a full level higher than its miserable 3G-only competitors in terms of connectivity.

With an M4/T3 hearing aid rating and the Android 7.1.1 Nougat OS topping it off, the ZFive C LTE seems like a decent choice for users who just want the essentials.

In 2020, we would expect more than only 2-megapixel of selfie camera resolution.

Not only does it have a 1.1GHz processor clock speed, but it also has 4 cores.

ZTE says that the ZTE ZFive C LTE provides 600 minutes of talk time. If it proves true in the real life, it may be a great advantage.

*** These cons and pros are computer-generated based on our proprietary algorithm and the specs we found for this phone. Should you spot an error, please let us know.