The iPhone 7 vs the Very First iPhone: See The Stunning Evolution! 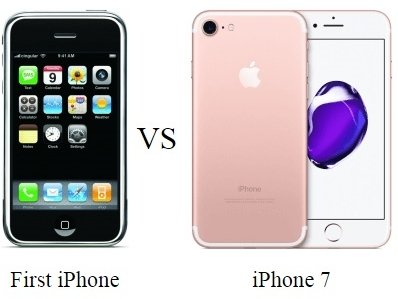 What do nine years mean in iPhone land? We checked it out and found changes as dramatic as 197%... well, wait! 1600% we meant! And we promise other whopping numbers if you read on.

Back in 2007, when the term smartphone was still jargon, the iPhone was a response to Motorola's once-wildly-popular RAZR flip phone and Nokia's N95 slider (both of which are now considered legacy phones), dabbling with the idea of a touchscreen-only handset that could compare with the famous phones of its era. Nine years later and numerous iPhones in, our specs comparison between the First iPhone versus the 2016 iPhone 7 reveals how much has changed from the Original iPhone's exploratory offering up to the iPhone 7's flagship-class feature set. Hills may be steep. Please remain seated.


After having explored the vast differences between the Original iPhone and its iPhone 7 descendant via this specs comparison, we leave you with these takeaways: