Initially released in the UK, the Nokia 800 Tough is a rugged and waterproof phone whose pros and cons make it sound somewhat more appealing versus a lot of other basic bar phones listed here on Phonerated.

That being said, our review of its specs still revealed a couple of questionable facets. For instance, it packs no more than 2100mAh of raw battery power

, which does not sound like much, coming from an LTE-ready rugged phone -- don't forget to explore some of the best high-endurance phones here. Adding to its cons is a basic 2.4-inch QVGA (320 x 240) screen

Don't Buy The Nokia 800 Tough Before You Check:

This rugged candybar does not aim for anything fancy hardware-wise, running on a dual-core 1.1GHz Qualcomm 205 processor alongside only 512MB of RAM

, but it does come with 4G network connectivity

, which we consider a huge pro in the basic and feature phone categories.

As for its true selling points, the 800 Tough rocks an IP68- and MIL-STD-810G-certified housing

, basically making it impervious to dust grains and liquids as well as resistant to extreme temperatures and accidental drops (It claims to survive drops onto concrete from up to 1.8 meters). It also features a 198-lumen flashlight

, mainly for field work under poor lighting conditions, and it comes with a safety loop

at the bottom of its body, letting users fasten it onto a lanyard or a bag strap. Also on board is a 2-megapixel LED-flash-rigged camera

that we consider a welcome perk, knowing that a few comparable models do not even bother with cameras. 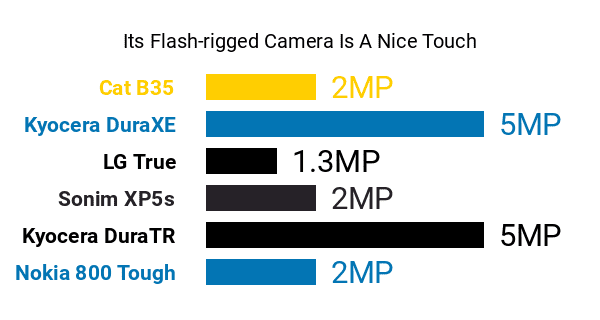 Also part of its mix of pros and cons is a modest 4GB native memory that can be expanded by a maximum of 32GB using a microSD card -- the memory card uses its secondary SIM card tray. It runs on Nokia's proprietary KaiOS platform and it comes preloaded with Facebook and WhatsApp.

Finished in either Black Steel or Desert Sand, Nokia's 800 Tough makes for a solid choice for adventurous users or those who are always out on field work.

** This phone is also known as: Nokia 800 Rugged Phone