Samsung Galaxy A50 Review of Pros And Cons


The Samsung Galaxy A50 is pretty much an upgraded version of the A30 that retains its sibling's middle-class 6.4-inch Super AMOLED (Infinity-U design) 2340 x 1080 FHD+ display -- we think a QHD+ (1440p) resolution would have made it a stronger high-end phablet contender. This time, though, it features an on-screen fingerprint reader

, scrapping the A30's physical rear-mounted sensor. Its slight cons also include the fact that it does not upgrade the A30's 4000mAh battery power

, despite running on a faster processor and coming with a higher RAM count (We'll break down its hardware specs further down this Phonerated review), although 4000mAh of raw power is by no means disappointing, at least by 2019 mid-range standards.

Don't Buy The Samsung Galaxy A50 Before You Check:

, whereas the A30 features a moderately-specked dual cam. Its main lens sits on a promising 25-megapixel raw pixel resolution, while the subsidy lenses sit on 5 and 8 megapixels accordingly. By the way, feel free to pit the A50 versus the best photography-focused smartphones here.

The Galaxy A50 also calls up our list of the best smartphones for selfies, rocking a high-resolution 25-megapixel f/2.0 selfie camera

right above its display. Sadly, unlike some of its selfie-driven rivals, it does not come with an autofocus feature

and it passes up on a front-firing LED flash

-- the Galaxy S10 models, which were also unveiled during the MWC 2019, feature selfie cams with dual pixel autofocus. 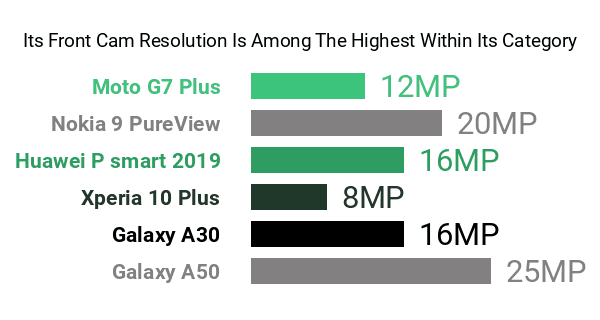 Going into its hardware pros and cons, the A50 is ably powered by a split-octa-core processor consisting of a quad-core 2.3GHz primary cluster and a quad-core 1.7GHz efficiency cluster

. Additionally, it offers a 6GB RAM

, whereas many slightly-older mid-enders settle for only 3GB or 4GB on that front.

complementing its passable 128GB or 64GB (depending on the variant) native storage. Also part of its selection of pros and cons are a glasstic exterior (polished plastic with a glass-like effect), the Bixby mobile assistant, and Samsung Pay.

In essence, the Galaxy A50 caters to shoppers looking for a mid-range smartphone whose highlight features include a large screen and some high-resolution cameras.